When reading the testimony of the witnesses to the Pearl Harbor hearings, references are made to buildings and locations in Washington, D.C., which no longer exist or have changed.  The attached photographs will help to better understand the events of November and December 1941. 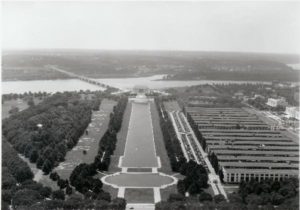 In the July 1938 photograph of the Lincoln Memorial above, the gigantic Navy and Munitions Buildings on the right side of the reflecting pond can be seen.  Both Army Chief of Staff George C. Marshall and Chief of Naval Operations Harold Stark had their offices in this building.  The Navy Building had 10 wings and the Munitions Building 8 wings.  Both of the four-story stucco buildings were built as emergency structures during World War I and were used until the 1960s.

Also the offices of both the Army and Navy cryptologists who deciphered the Japanese messages in the Fall of 1941 had their offices in these buildings.

In the the 1930 photograph on the Virginia side of the Potomac, the U.S. Department of Agriculture’s Agricultural Research Station is visible in the upper left corner. 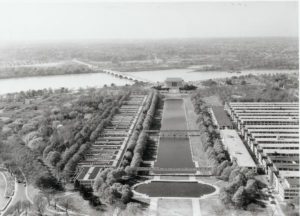 In the 1943 photograph,above the Arlington Cantonment has replaced the Agricultural Research Station.  The Cantonment made up of pre-fabricated buildings was largely in place, but still a construction site on the morning of December 7, 1941 where Army Chief of Staff George C. Marshall said he went riding that morning when he could not be found by the crytologists with the 14-part of the Japanese diplomatic reply to Roosevelt’s message.  Marshall did ride regularly in the former Agricultural Research Station, but on December 7, 1941 it no longer existed. 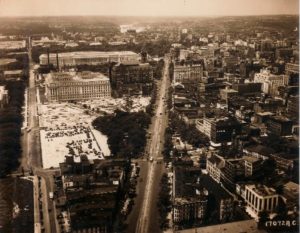 In the aerial photograph circa 1931-1932, the Navy and Munitions Buildings can be partially seen in the upper left side of the photograph where they faced onto Constitution Avenue.  For orientation purposes, the large parking lot dominating the center of the photograph is the former farmer’s marked on which the National Archives Building was built a few years after the photograph was taken. In this photograph it is to see the likely route that Navy Commander Kramer took on December 7, 1941, in delivering his messages first to the offices of Marshall and Stark in the Navy and Munitions Buildings, down Constitution to 17th and up to the White House to deliver the message to Roosevelt, and then over to the Old Executive Office Building (now called the Eisenhower Executive Building) to Secretary of State Cordell Hull’s Office, where Kramer found Col. Bratton, the senior Army cryptologist was already waiting.